No Child Need Go Hungry on

NCCF board members Sue Klett and Ken Heise recently visited with Nelson Kid Care volunteers to find out what motivates them to tackle child hunger head on in the county. Nelson Kid Care has received grants from NCCF to support its mission, and a number of NCCF’s donors also volunteer with the program.

In a cavernous warehouse, half a dozen retirees move rapidly down a line, plucking small food items to pack in a plastic grocery bag. They bundle the bags into the back of an SUV at the end of the row. Once filled, the SUV takes off to deliver its cargo to area public schools, where the food bundles are distributed quietly and anonymously to children. For some, the food parcels may be the only sustenance they receive over the weekend. The cans of pasta, peanut butter crackers, apple sauce and such may carry the children (and siblings with whom they share) through to their next fresh meal from the weekday school free meals program.

Like clockwork this process repeats for two shifts every Thursday at the commercial food warehouse of Blue Dog Associates in Lovingston. A matching scene unfolds weekly at Rockfish Presbyterian Church in Nellysford. For nine years it’s been the mission of Nelson Kid Care. The program was an outgrowth of a Lenten study group on poverty undertaken by area Episcopal churches.

“We have the best volunteers in the world. It’s a testament to Mike’s legacy,” said his widow, Nancy Tapager

Founding director Mike Tapager oversaw Nelson Kid Care until his untimely death in 2018. Carrying on as co-directors in his memory are his daughter, Katie Hughes, and Rev. Marion Kanour of Grace Episcopal Church in Massies Mill. The all-volunteer program operates under Amherst-Nelson Cares, Ltd., a non-profit 501(c)(3) charitable organization that helps keep administrative costs to down around 2 percent of Nelson Kid Care’s $40,000 annual budget. The program struggled financially in the year after Tapager died, when fund raising was suspended until the program’s administration could regroup, said Kanour. “At one point we were $20,000 short, but we’ve turned the corner on that deficit.”

Churches, businesses/individuals, and other community non-profits each supply about one-third of the funding for Nelson Kid Care. In addition to receiving a grant from NCCF, the nonprofit endowment board of Emmanuel Episcopal Church continues to provide grant funding. Nelson Kid Care also partners with local businesses who adopt it as a nonprofit organization, in exchange for voluntary help at business events. “Our goal is to be fully community sustainable,” said Kanour. “In part, that means we’d really like a business or a consortium of businesses to commit to regularly funding a portion of our budget. Or a really large donor or an endowment would be nice!” 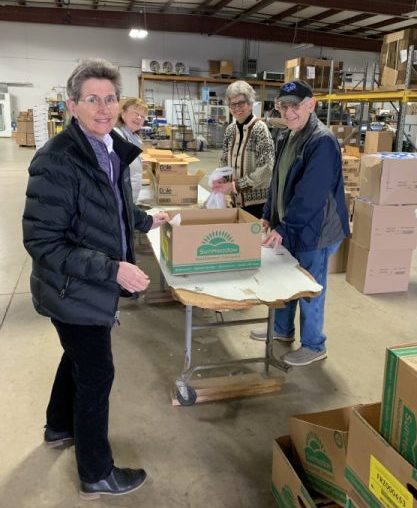 The driving force behind Nelson Kid Care is a large, committed volunteer pool of about 140 persons (mostly retirees) who purchase, stuff, and deliver meals to schools. “We have the best volunteers in the world. It’s a testament to Mike’s legacy,” said his widow, Nancy Tapager. Through careful negotiating and purchasing, the program has been able to keep the per child cost per bag to $4-$5 to serve as many children as have been referred. Nonetheless, the program has had to scale back meals—by dropping the fruit drink or Gatorade—to keep the meals affordable. Blue Dog Associates, a commercial food supplier to elder care agencies, sells food items at cost to Nelson Kid Care, and donates warehouse space for packing student meals. Other food is purchased at area big box stores.

“If [the kids] come, we’ll feed them. It’s like the loaves and the fishes, only we supply ravioli and granola bars,” assured co-director Kanour.”

Nelson Kid Care estimates it is serving approximately 27 percent (255 persons) of the free lunch eligible student population. Although all four Nelson County Public Schools participate during the school year, most recipients are elementary school aged. The program is dependent on referrals made by school officials. But Kanour admits a more consistent recipient identification and referral process would help increase program participation.

Another challenge has been making the meals more nutritionally balanced. The meals are meant to supplement other foods, and have to be “shelf stable” in case they get left behind on a bus or in a locker. Also, since most recipients are young children, the meals must be ready to eat, without much preparation required, Kanour noted. That means fresh items, other than the occasional apple, are not included.

Could Nelson Kid Care serve even more students with weekend meals? “If they come, we’ll feed them. It’s like the loaves and the fishes, only we supply ravioli and granola bars,” assured Kanour with her trademark grin.

Click this link to read other interviews with other beneficiaries of the NCCF.

Please get in touch with us if you are interested in learning more about the Nelson County Community Fund. We also welcome your questions, comments, and suggestions.