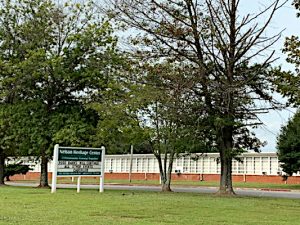 Built in 1960, the Nelson Heritage Center started as an all-black high school until the integration of the current high school. Now as a community center, its supporters also strive to preserve the culture and history of the surrounding ethnic populations.

Every community has a place that serves as its heart. In southern Nelson County, it is the Nelson Heritage Center—and more precisely, its aged gymnasium. When a tenacious group of black community leaders succeeds with an ambitious fundraising plan, the gym will be restored to its former status as the hub of activities in the Heritage Center.

Like a cat with nine lives, the Heritage Center in Arrington, VA, has had a few reincarnations. First erected in 1960 as the county’s all-black high school, it later became the countywide middle school when the current county high school was integrated. After a new middle school was built, the aging facility became simply a warehouse for disused county equipment. It was rescued by the Millennium Group, a nonprofit formed in 2004 to restore the old building and create a community gathering place known as the Nelson Heritage Center. 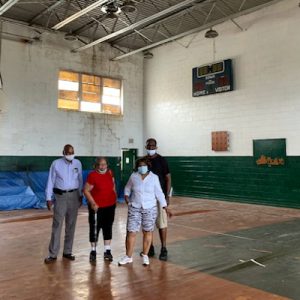 The Millennium Group, standing in the currently condemned gym, is working doggedly to restore it to its former glory so that the young and the old have a healthy outlet for exercise and fun. (L-R) Rev. James Rose, Margaret “Constance” Henderson, Edith Napier, and Rev. Rodney Sandidge.

The gym, too, remained an exercise outlet for youths and seniors, including offering activities through the county’s parks and recreation department. That is, until 2008 when the gym was abruptly closed and condemned due to a long-standing crack in the wall. Already financially stretched, the Millennium Group was required to have an engineering study done, which determined that the gym remains structurally sound, despite the cracked wall and a leaky roof.

“Initially, the whole building was condemned—and we had no warning,” said Edith Napier. But she and other members of the board of the Millennium Group successfully petitioned to allow all but the gym to be reopened for community use. The goal of the Millennium Group has been to use the center to promote education, to preserve the culture and history of the county’s African American population, and to provide services to benefit the community as a whole. “I started school here in the 7th grade in 1960, and I thought it was the most wonderful building in the world,” said Napier.

“This is a historical African American building that was and is vital to the community. But it’s also a place that offers opportunities for people of all age groups. It’s a place where the entire Nelson community can come together.”

She acknowledges, though, that it has been a daunting task to remake the old school into a community center. “When we received the building, it was filled from floor to ceiling with items the county no longer needed,” said Napier. It took a major community effort to empty and clean out the building. The Millennium Group also launched a serious fundraising effort, obtaining grants from area nonprofits such as the Nelson County Community Fund. Inc. and Bama Works.

The center now houses spaces for a cultural center, classes, special events, a commercial kitchen, a computer lab, a charitable clothing and furniture distribution effort, and two food banks. Furniture and food distributions, in particular, have been on the rise with the impact of the Covid-19 pandemic, noted Rev. Rodney Sandidge, another Millennium Group board member and pastor of the nearby St. John’s Baptist Church. “Our big goal now is getting the gym renovated.” 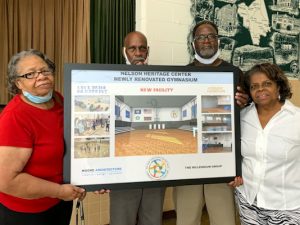 The push to restore the gym started three years ago when Millennium Group board member Margaret “Constance” Henderson led the charge, staging a series of fun nights and community dinners to raise money. She had heard of some local youths getting into trouble, and “I decided we needed a place for the kids to go,” said Constance. Her focus on youth is natural, given that she once managed the old school cafeteria there. “This building was built for the African American people. It went out of their hands and has come back into their hands, and they are struggling to make it a better place for the youths as well as the seniors.”

The gym is scheduled for a new roof this month (October), but that is just the beginning, said Sandidge. The goal is to raise $200,000 for the gym, including repairs to the old wooden floor in phase two, and a new HVAC system in phase three. “We were getting good at attracting grants until the pandemic started. But the priority now is on food and shelter, and rightly so,” he added. Donations toward the gym restoration can be made by going to the Gofundme link on the Heritage Center’s website. 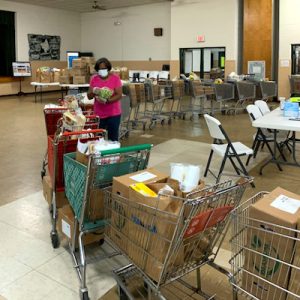 It’s important to remember how widespread the center’s impact is in the community, noted Rev. James Rose of Montreal Baptist Church in Shipman, and another Millennium Group board member.

To that end, the center has been broadening its community services. It created space for a child care center that was to open, before plans fell through due to the pandemic. Now, the Millennium Group is working to bring the Virginia Health Department’s facilities, including a clinic and environment health office, to the center, once its lease is up at the Blue Ridge Medical Center. “It would anchor the center to house the health department,” said Napier. “We think it would benefit the community to have something like this in the west district and southern part of Nelson County,” added Sandidge. “We’ve done a lot of the legwork already, including contractor and architectural evaluations.”

“There’s a lot of opportunities here [at the center], and with the community’s help, we can get everything taken care of—inside and out.” 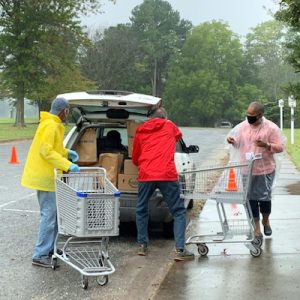 The Blue Ridge Mobile Food Pantry stages a drive-through grocery distribution on the first Tuesday of the month. Both have seen increased demand due to the Covid-19 pandemic.

What has made the Nelson Heritage Center most successful to date are the hundreds of thousands of hours put in by volunteers to restore and maintain it. “We all wear several hats,” said Sandidge, who joked that he also doubles as the center’s custodian. “I think the future of the community center, once the gym is open, will be to bring back our youth and also our older people, where they can once again have fellowship with one another.”

For information on NCCF and to make a donation go to www.nelsonfund.org

Click this link to read other interviews with other beneficiaries of the NCCF.