FLAG Shows How Everyone Can ‘Walk Without Fear’

We’ve all been there. Pulled into an unwanted hug or touched without warning in a crowd. Perhaps even survived an attack or a dispute that turned physical. But it doesn’t have to be that way.

Thanks to a group of committed young martial artists in Nelson County, anyone—regardless of age, gender, or physical ability—can learn how to “walk without fear” by mitigating such situations and reacting swiftly and safely when the need arises. 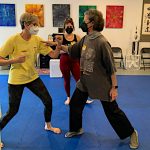 The nonprofit Fight Like a Grrrl Club (FLAG) was born out of a need to address the growing violence against young women, including the abduction of five young women in 2009-14 from the “U.S. Route 29” through Nelson County and neighboring jurisdictions.

“FLAG’s goal is to make self-defense training accessible to all community members,” said local musician Sally Rose Monnes, who co-founded the nonprofit in 2017 with martial arts instructor Josh Copson. Using a grant from the Nelson County Community Fund, FLAG is putting on two nonviolent self-defense workshops at community centers in Nelson County, on May 14 and 15. The workshops are free and open to the public, but preregistration is required here: fightlikeagrrrl.org/workshops.

FLAG focuses on techniques for de-escalating and avoiding violence, first, then if needed, skills for self-defense and survival. The group has done workshops across Virginia for everyone from the Girl Scouts to roller derby clubs. The workshops are not restricted to girls and women. “Anyone can be a target,” said Monnes. “Regardless of their race, ethnicity, sexual orientation or gender identification, they deserve to know how to protect themselves and their loved ones.”

What about those who are older? Two members of the NCCF Board of Directors got an exclusive hands-on demonstration of FLAG’s avoidance/self-defense instruction recently at Copson’s martial arts studio, Blue Dragon Dojang, in Lovingston.

“Learning that it’s not impolite to say, even to an acquaintance, that you don’t want to be hugged, or to firmly block an unwanted touch is powerful,” said Sue Klett. “Not to mention that I now know how to roll a 210-pound assailant who’s grabbed me over my back, without hurting myself.”

There were many takeaways from the workshop, agreed NCCF board member Linda Hughes. For instance, “If you’re being attacked, it’s much better to yell ‘Fire’ or ‘No’ — instead of ‘Help’. That will attract more attention and quicker action,” said Hughes.

If two 60-somethings can spend a couple of hours learning how to better “walk without fear”, and react quickly and safely when the need arises, anyone can—and should. 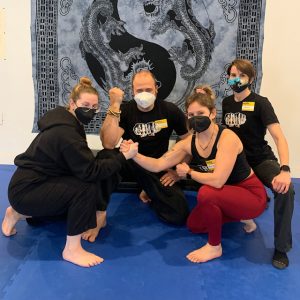